The last six months have seen an unprecedented number of discoveries of soundtrack discs and nitrate film. When we began the Project in 1991, we believed that eventually there would be a leveling off of disc finds, and certainly of film elements. Fortunately, that has not seen the case. Since the beginning of 2009, more than 150 soundtrack discs have turned up, mostly in two large collections.

In March, Ron Hutchinson of the Project won a single, not particularly important, Columbia feature soundtrack disc on eBay. The seller was acting for an older collector in Australia and inquired if there was interest in seeing the list of his entire disc collection. Of course! A listing of over 80 more soundtrack discs was sent immediately. Virtually all were Columbia shorts and features from the 1929-30 season. A deal was quickly made and the discs were shipped to Ron with only a few casualties. The collection was particularly important because it contained discs with previously missing sound for the first Krazy Kat sound cartoon RATSKIN, 1929 --- see Jerry Beck's nice attempt at re-synching this after 80 years at http://www.cartoonbrew.com/classic/the-first-sound-krazy-kat-cartoon-ratskin.html, and a number of the Columbia-Victor Gem one reel shorts which were shot at the Victor Talking Machine Company in Camden, NJ, and other important features soundtracks. The Columbia-Victor Gems were among the only sound films outside of Warner Brothers/First National that were disc-recorded (Hal Roach was the other exception for a short period). Most important among these shorts for which sound is now available are two by SHOWBOAT singer Jules Bledsoe, shorts by vaudevillians Georgie Price, Buddy Doyle (who Jolson claimed did a better job than him in the stage JAZZ SINGER), and the phenomenal comedienne Nan Blakstone. Perhaps most important of all is the discovery of the disc for JAIL HOUSE BLUES (1929) starring legendary blues singer Mamie Smith. Years ago, another disc was found but severely damaged in shipment for restoration. A huge bite out of the disc prevented most of it from being played. YouTube has a short portion of this short with sound, but only as much as the surviving part of the disc allowed. Now the entire short can be restored and enjoyed again.

At press time, The Library of Congress and Columbia/Sony have indicated interest in restoring a number of the shorts.

Another collection was found in Boston just a few weeks following the Australia find. A film collector had acquired about 60 discs many years ago from an old film exchange. They then sat for years, forgotten, until he attended last year's Cinefest and spoke to the Project. Rich Finegan visited the collector and meticulously catalogued the discs. Among the important discs are 5 reels of Universal' Eddie Leonard feature MELODY MAN (1929) for which some film fragments were discovered last year.

The following discs were acquired this spring from Australia. All are Columbia Pictures unless otherwise noted:

While discovery of soundtrack discs still occurs with some regularity, and occasionally in big bursts as reported above, the uncovering of nitrate film is much rarer. As years pass, the chances of finding unstable nitrate films deteriorates as the film stock itself does. It was therefore welcome to hear from Austrailian Paul Brennan this June. Paul reported that the complete 35mm Technicolor print of the thought lost (except for final reel) of the Tiffany 1930 feature MAMBA had been screened there recently. The collectors had sound discs just for reels 5, 6, 7, and 8 and attempted to synch them up at the screening. The Project immediately notified Bob Gitt at UCLA. In 1992, Bob's "wish list" of restorations (most now done) include their final reel of this expensive color feature. Bob reported that all sound discs for the feature reside at UCLA, so a complete restoration is possible. Work is now in progress to assess funding and restoration details. Bob had previously supervised important Technicolor restorations (GOLD DIGGERS reels, BECKY SHARP, FOLLOW THRU, many more) so he is particularly suited to helm a restoration of MAMBA should funding be found. MAMBA starred Jean Hersholt, Eleanor Boardman and Ralph Graves, and was poverty row Tiffany Studios attempt at a big budget, all-color talkie. People who have seen the nitrate print report that the color is eye-popping!

Also discovered were all 12 nitrate reels plus matching Vitaphone soundtrack discs, for a 1930 sound re-issue of D.W. Griffith's THE BIRTH OF A NATION (1915). A number of important silents (BEN HUR ('25) THE BIG PARADE ('25) ) were reissued with music and sound effects tracks when talkies arrived. The Project has connected the collector with folks at The Library of Congress to pursue restoration possibilities.

These last six months indeed represent perhaps the most active and productive in terms of discoveries. Let's hope the trend continues!

We recently picked up this September 28, 1929 flyer for Brooklyn's Loew's Kameo Theatre and wondered if the theatre still existed. A quick visit to the Cinema Treasures website answered the question. The site lists over 25,000 theaters and provides info on each of them. In this case, the Kameo still exists, albeit in another incarnation as a church. Even the rooftop theatre survives and the striking Egyptian façade is largely intact. For the whole story, including recollections of customers of the Kameo, go to http://cinematreasures.org/theatre/3863/

We've added yet another more rare soundtrack CD's to thank those who contribute to The Vitaphone Project. We've compiled 8 of the 1929-30 Columbia short subject discs recently found in Australia (see our cover story), including Nan Blakstone, Mamie Smith, Leon Navarra, Georgie Price, Fay Marbe, Buddy Doyle, Jules Bledsoe, and the first sound Krazy Kat cartoon! This CD is in addition to the recent new Volumes 1 and 2 of 1929-30 Universal Studios music themes used to intro segments of their newsreels and shorts, we now have a Volume 3 --- with 96 (!!!) 30-second music cuts! Each selection runs only 30-40 seconds and is a jazz, traditional or original tune.

Each counts as one CD.

And from our existing library.

Remember that these are unique, non-professional (but highly listenable) recordings of rare early talkie material. No fancy notes or packaging, but we are sure you will enjoy them. Contributions, while not deductible, are greatly appreciated and help us continue to get the word out on our efforts. You may go to our website and contribute via PayPal, or send your check (payable to Ron Hutchinson) to 5 Meade Court, Piscataway, NJ 08854.

Donate to The Vitaphone Project securely with any major credit card through PayPal!

Checks (not deductible) should be made payable to:

A number of recipients of Vitaphone News send in generous donations regularly, and this is greatly appreciated. If it has been a few years or longer since you've sent in a contribution, please consider doing so. Postage rates went up again recently, and combined with rising printing costs, makes your support more important than ever. Virtually all contributions go to the printing and distribution of VITAPHONE NEWS. Please consider sending in a donation today. You may go to our website and contribute via PayPal, or send your check (payable to Ron Hutchinson) to 5 Meade Court, Piscataway, NJ 08854. Thanks!

We recently became aware of a wonderful website put together by Jonas Nordin of Stockholm, Sweden. It's "All Talking! All Singing! All Dancing!" and covers the period of 1927-31 with stories, film clips, and stills. Recent entries focus on Alice White, MGM dance director Sammy Lee, and QUEEN KELLY.

Check it out at: http://talkieking.blogspot.com

George Feltenstein, Senior VP of Warner Home Video, has done it again! Warners is now opening up their vaults to enable customers to obtain custom DVDs of hundreds of films that might ordinarily never see a release. Promising 300 titles by year-end, and a goal of 20 new titles per month, The Warner Archive series can be viewed at:

For $19.95 each, a custom made DVD is burned for you and mailed. Films may also be downloaded. Silents, B musicals, early talkies, and much more, are part of the initial offerings. George tells us the public has really responded to the new idea, and that bodes well for future offerings from deep in the vaults. A few examples of titles that otherwise might never see DVD release: EXIT SMILING ('26), THE RED MILL ('27), SAY IT WITH SONGS ('29), BIG BOY ('30) and Vitaphone-scored features OLD SAN FRANCISCO ('27), THE BETTER 'OLE ('26), THE FIRST AUTO ('27).

Eventually, Warners hopes to offer custom DVDs of Vitaphone shorts as well as most of their 5500+ features from their WB, MGM and RKO library. 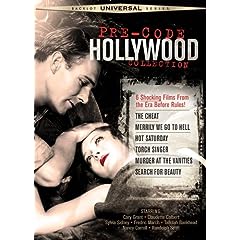 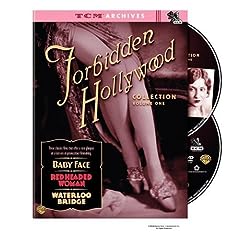 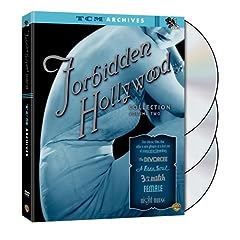 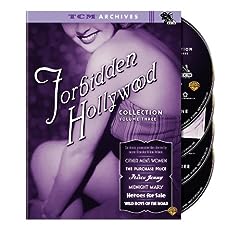 This is also a good place to mention that Universal has released their "Pre-Code Hollywood Collection". Included are the features THE CHEAT (Par/'31), MERRILY WE GO TO HELL (Par/'32), HOT SATURDAY (Par/'31) with a Maltin favorite tune "I'm Burning For You"!, TORCH SINGER (Par/'33), MURDER AT THE VANITIES (Par/'34) and SEARCH FOR BEAUTY (Par/'34). Nice to see Universal joining Warner Home Video in releasing this early material on DVD. Warner's own "Forbidden Hollywood Collection, Volume 3", was also released earlier this year. In addition to features OTHER MEN'S WOMEN (WB/'31), THE PURCHASE PRICE (WB/'32), FRISCO JENNY (WB/'33), MIDNIGHT MARY (WB/.'33), HEROES FOR SALE (WB/'32) and WILD BOYS OF THE ROAD (WB/'33) all directed by William Wellman, the boxed set is overflowing, as always, with lots of extras. These include a doc on Wellman, three Vitaphone Philo Vance shorts, some incredibly bouncy Merrie Melodies cartoons and other shorts and trailers.
50+ VITA SHORTS RESTORATIONS UPDATE

As previously reported, Warner Brothers, under the direction of Ned Price, is funding and restoring over 50 1926-30 Vitaphone short subjects. Bob Gitt, retired Chief Preservation Officer at UCLA, is assisting. The Project is providing the funding (with donations primarily from generous Dudley Heer) to make projectable 35mm prints (which WB does not require). At press time, about 25 of the shorts have been restored. Ned found that four shorts had badly cracked discs. The Project was able to provide replacements for two of them, For the other two, Ned is enlisting the expertise of Jim Cooprider, who repaired the severely cracked (in 5 places) disc for AL JOLSON IN A PLANTATION ACT (1926).

It is expected that at least some of the restored shorts will be available for public screening in early 2010. We will of course keep you posted on details when they become available.

MAMMY WITH COLOR SOON ON DVD

In addition to Warner Archive's current offering of individual DVDs of Jolson's THE SINGING FOOL ('28), SAY IT WITH SONGS ('29), BIG BOY ('30), WONDER BAR ('34) and THE SINGING KID ('36), MAMMY ('30) will also be available later this year as part of a planned Jolson boxed set. The Technicolor sequences, beautifully restored by UCLA, will be incorporated into the DVD. This is something early talkie and Jolson fans have been requesting for years.

Art Pierce has done it again, assembling another weekend this August 7-9, chock full of early silents and early talkies at the Rome, NY Capitol Theatre. Included, as always, are some Vitaphone shorts. This time Art has scheduled HELEN MORGAN in 'THE GIGOLO RACKET' ('31), ANN BUTLER AND JAY BRENNAN in 'YOU DON'T KNOW THE HALF OF IT ('29) and CRIMES SQUARE ('30) starring Pat O'Brien. Features include the WB operetta VIENNESE NIGHTS ('30) and FOX MOVIETONE FOLLIES OF 1930.

For full details, go to: http://www.romecapitol.com/capfest7form.pdf

IF YOU WOULD LIKE TO BE NOTIFIED WHEN NEW ISSUES ARE ADDED TO THIS WEB SITE:


This web site is maintained by Patrick Picking:   patrick@picking.com
Copyright 1996-2011